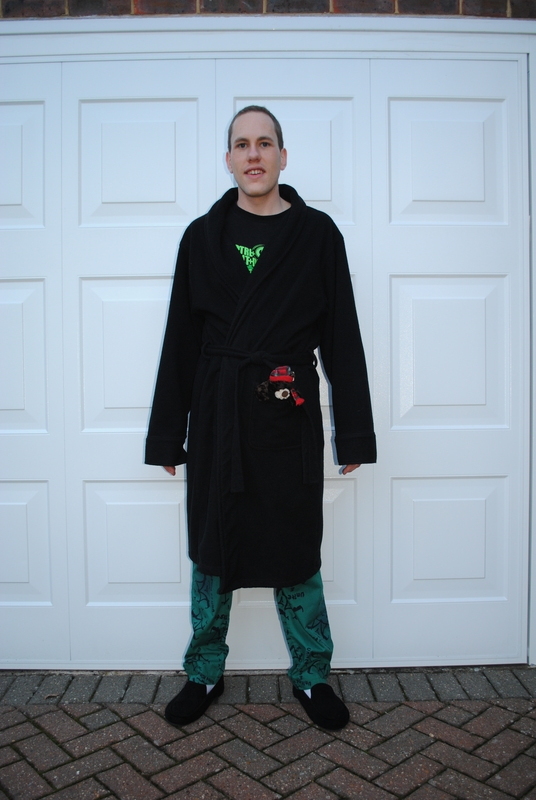 It was mufti day at work, I decided to wear something I'd be comfortable in...

My teddy bear came along too (in my pocket) and proved to be a great listener.

While back I tweeted the good news that I'd got my dissertation grade. Well today this letter arrived:

Dear Dan,Programme: International Business Management MSc FTI am pleased to advise you that at a recent Postgraduate Board of Examiners, held on 11 November 2009, a recommendation was made for you to be awarded an MSc International Business Management with Merit. This recommendation does, of course, have to be ratified by the Senate Progression And Conferment Executive (SPACE). Following this you will receive formal notification from the University Registry.May I take this opportunity to congratulate you on your academic achievement and wish you well for the future. Yours sincerely...

Woo! I wonder when the Registry will get back to me...

And I would LOVE to be a part of an all-powerful group that call themselves SPACE. 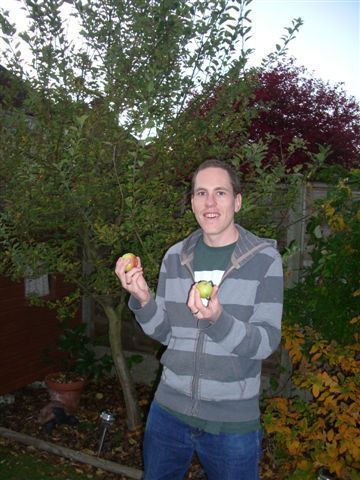 Yes! Incredibly, I planted the tree you see behind me in this photo and it actually produced two apples this year.

I was 6 years old and saw an episode of Blue Peter about planting trees. I decided to pot the next apple seed I found indoors, and surprised my family when it grew six inches seemingly overnight. From there it moved to the garden, and despite being re-located three times it has managed to grow to just over 9 feet tall. This year is the first that I've seen it give me... I'm really not an expert but I think they're Braeburn apples. Definitely won't be joining a gardening club, watching Alan Titchmarsh or spending time AFK to sit with my tree any time soon. But it's cool to sit in the warm and know that outside my window is something I planted and it actually did more than just survive. Kudos mother nature.
As you can see, I've started to work on a new theme for blog.mled.me. I will begin to host the blog on Posterous, consuming mobi.mled.me. A very big THANK YOU should go to Darren from DTD Studio for kick starting that process with an awesome collection of cartoon social media icons. I'm going to try and make those into links to each profile that they represent. CSS is a nice challenge. The redesign process has made me reconsider what I actually want and need from a blog. I'm not quite at the level of Posterous devotion to promote it as often as Steve Rubel, but I am enjoying the simplicity of platforms like Tumblr and Posterous. Working on the header, I was reminded of a conversation (via DM) I had not too long ago on Twitter. I was asked about my tag line "my life is still in beta". I started using the line on my first wordpress.com blog because I loathed the default "Just another Wordpress.com blog" message. I thought it was slightly witty and fun, but I honestly didn't give it much thought. Recently I've come to reconsider that phrase and its relevance to me and the way I lead my life. It was during some of the intensely demanding periods of writing my dissertation that I experienced brief moments of total mental clarity. I get the same sensation when running, being consumed by one tough task allows me to see through to other thoughts and ideas. My realisation was that I absolutely 100% live by the expression "the thrill is in the chase". I will work with and complete a To Do list but I don't enjoy the concept, instead I like to just have a bullet point list to provide a broad overview of my most serious projects or processes so I have some direction. I traced the cause of this right back to primary school. I was surrounded by high achievers and I didn't really stand a chance at winning class prizes or awards for sports, but I came away from that school with every badge of honour you could associate with stamina and effort. I won medals at cross country, I received project prizes and endeavour awards. In free time the Scout Association drove my extra curricular activity, offering me the chance to take on different challenges and be what I wanted to be. I developed a rather cynical view of reward, finding it to be a termination point at which a medal or certificate put a stop to activities I enjoyed. Growing up this apparently continued and I found that people value effort and any help I could give to assist them in achieving their goals. I now know that it is in fact bad to live life solely in the pursuit of others' dreams. At the same time, it is important to play to your strengths. That (somehow) leads me back to my tagline. My life will always be in beta because that is just how I find the strength to do things. My focus is on the process and I live my life to enjoy the journey.

Yesterday I had to take my dog to the vet for surgery on his ear. He had grass seed stuck down there, it had pierced the ear drum and become infected. Poor guy. Today he's feeling much better having recovered from all the sedatives and injections with a decent night's sleep. There are some photos of him looking miserable in a giant cone-shaped protective collar on my Flickr account. Once he's taken the course of antibiotics and steroids he'll be back to full health, free to play football and eat apples. 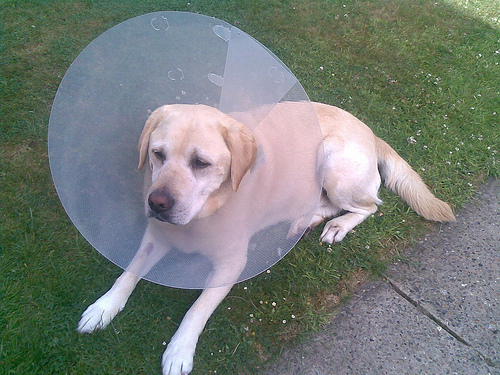 The whole experience kick started a wave of nostalgia in my family, and we reflected on some of the highlights of the journey from poop-machine puppy to 9 year old gentle-dog of leisure. We agreed that couples should have to raise a puppy without resorting to brutally beating it before they're allowed to have kids. If you get it right, a dog becomes another member of the family. It got me thinking about some of the lessons I had learned from having a dog:

1. Trust your instincts If the dog barks at someone, it shows his instincts are telling him they are not to be trusted. Over the years, this instinctual judgement of people has proved remarkably accurate. He's unable to formulate elaborate plans with his limited capacity for thought and is solely guided by instinct, but this seems to work quite well.

2. Actions speak louder than words Dogs can't talk, shame. That doesn't mean they can't communicate. Some of the facial expressions and gestures that my dog makes couldn't be made clearer with words, and the way in which we interact is based around action rather than words. This has made me incredibly aware and critical of the way in which I communicate with others, I can say less and convey more.

3. The carrot is better than the stick You can either motivate people by being aggressive or rewarding them. In the long term, a fair reward system works best as it will form a relationship built around trust and mutual respect.

4. Every action has an equal and opposite reaction If you over-feed a dog, a walk in the park is going to take longer as there will many more answers to the call of nature. Similarly, if you train for the command "fetch" to include mauling the object, don't expect to be able to use that for retrieving items intact.

5. If you've got lemons, make lemonade I gave the dog an IQ test. The test was a cube with a simple maze inside and food at the centre. Normally, dogs push the cube in different directions to shift the food around the maze until it falls out the exit hole. My dog has big teeth, a powerful jaw, and a small brain. He showed that he knew his strengths and limitations and worked with them - he destroyed the cube to get to the food.

6. Fool me once, shame on you. Fool me twice, shame on me Sometimes we play games where I will hide his toys and help him find them again. I can only use a hiding place once, he'll remember them the next time and visit them first. If I've not used a location in a long time and we find it there, he remembers and gets annoyed at himself and me for not visiting that place straight away.

7. Variety is the spice of life But variety is only fun to experience if your life is based around routine. The dog knows his day-to-day schedule for meal times, walks and naps. He enjoys mixing things up once in a while by trying to exercise those habits when staying at a friend or relative's house.

8. Keep it simple On a camping trip, the dog worked like a Trojan and dragged massive logs from where I was cutting them back to the fire pit. He had one simple task to perform and did it brilliantly. The process stopped when someone else tried to add extra roles to his return journey.

9. You can lead a horse to water, but you can't make it drink This applies to dogs too.

10. Some rules are made to be broken There are strict rules that the dog abides by at home. These include not climbing on or destroying any furniture, not going upstairs, and not begging for food from the table. He is not supposed to take any of his toys in the living room and play in there because of the carpet, leather sofa and various breakables. Over the years there has been a constant battle to keep the toys out. But by focusing his attention on trying to defy this one rule, he is prepared to embrace every other rule.

Some of these lessons are akin to an Aesop's fable, but how useful is theory without witnessing a practical application of it? I certainly feel I've gained wisdom and a greater tacit understanding of life from having a dog. I challenge cat owners to prove they can say the same. Keep your cheeseburgers.